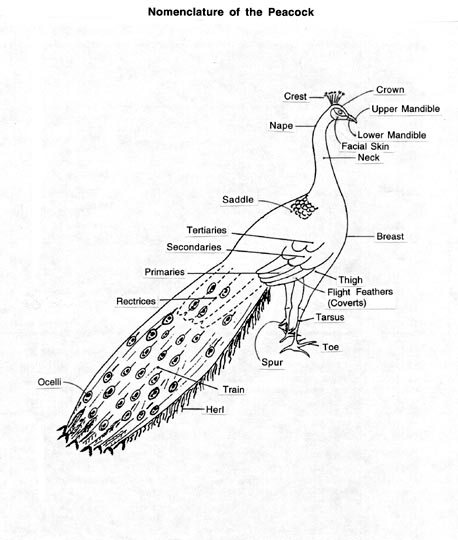 4. Hybrid- an offspring of parents of different genotype of different breeds, varieties, or species, which must be related to produce fertile offspring.

5. Mandible- upper and lower segment of the bill.

6. Mutation- a relatively permanent change in hereditary material involving either a physical change in chromosome relations or a fundamental change in genes.

11. Saddle- the rear part of the back extending to the tail.

12. Secondaries- any of the quill feathers of the forearm of the wing.

13. Sickle- feathers which resemble a sword in shape. Lowest feathers on train when raised in display.

14. Spur- still sharp spine located on back of leg.

16. Tarsus- the portion of leg between toes and thigh.

18. Train- display feathers of the male consisting of sickle, fan, and ocelli feathers of varying lengths which molt near the end of mating season.