This mutation has patches of white replacing many of the normal colors of the cameo. The white patches may be located anywhere on the bird. The more select bred Cameo Pied will have white radiating throughout the train. Cameo Pied bred to Cameo Pied do not breed true. When Cameo Pied is bred to Cameo Pied the theoretical ratio of 1:2:1 should occur (25% White, 50% Cameo Pied, 25% Dark Pied). The Dark Pied will resemble Cameo with white flight feathers or coverts. 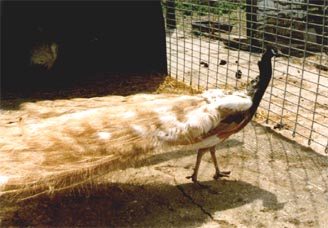