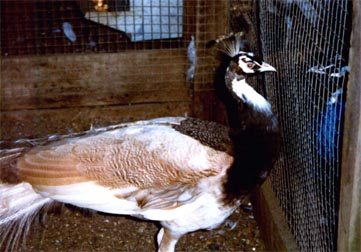 This mutation has patches of white replacing many of the normal colors of the Cameo. The white patches may be located anywhere on the bird. The male has a white throat patch under the lower mandible on the neck. The exterior of the wings and shoulders are barred with detailed brown on white. The tops of the shoulders are a grayish brown with white flaking. More select bred males will all have white centers in the eye train feathers. When Pied is bred to Pied, the theoretical genetic ratio of 1:2:1 should occur (25% White, 50% Cameo Pied White Eye, 25% Dark Pied). The Dark Pied resemble Cameo in appearance. 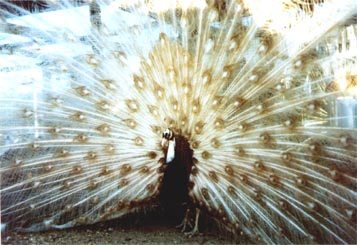